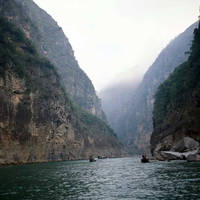 From 18-22 October 2013, the International Symposium on Ecohydrology and Water Security sponsored by Wuhan University, the International Water Resources Association (IWRA), the International Association of Hydrological Sciences (IAHS) and Global Water System Project (GWSP) will take place in Wuhan and Yichang, China. The topics of the symposium include modeling water cycle and eco-hydrological processes, forming mechanisms and control for flood and drought disasters, water quality management and water pollution control, and water security for ecological civilization construction and governance.

In collaboration with its Chinese node, GWSP will organize a session on enhancing water security to the benefits of humans and nature. The session will focus on challenges that fast growing economies face in terms of water security and trade-offs between human and environmental water needs. While elaborating on and comparing experiences from different countries, priorities for research and policy can be identified.

China is facing increasingly significant challenges in terms of wisely managing water resources to support rapidly socio-economic development in 2020 and beyond. With a vast area of 9.6 million km² and relatively abundant water resources, China ranks sixth in the world after Brazil, the Russian Federation, Canada, the United States and Indonesia in terms of the absolute amount of annual runoff. However, given its large population of over 1.3 billion, China has a very low per capita amount of water resources (around one quarter of the world average), and thus faces one of the most severe water shortages in the world.

In China, the major basins, such as the Yangtze River, Yellow River, Pearl River, Hai River and Huai River basins, are facing different degrees of flood and drought, degradation of water ecosystems, and serious urban water problems such as water shortages and water pollution. Solving the above water issues and the protection of ecology and water security are the key to achieve strategic development goals in these regions.